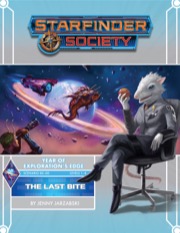 With her schemes unveiled, the nefarious ysoki known as Datch moves to enact her plan to plunge AbadarCorp into chaos. All that stands between Datch and her objective is outgoing First Seeker Luwazi Elsebo and the team of loyal Starfinders she has assembled for one last mission on her watch. With the Society’s future hanging in the balance, the Starfinder Society finally puts an end to the architect behind the plot to smear their reputation.

Content in The Last Bite follows-up on the events of several Year of a Thousand Bites scenarios, though playing these previous scenarios is not required. Content in this scenario also contributes to the continuing goals of the Second Seeker (Luwazi Elsebo) faction and definitively concludes the ongoing year of the A Thousand Bites storyline.