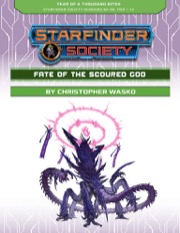 Led by their divine herald, Dhurus, the jinsuls of the Scoured Stars have spent the last year converting their ancestral homeland into a vast war factory. Unable to ignore the jinsul threat any longer, the Starfinder Society and its many allies undertake one final, decisive mission into the Scoured Stars to end the jinsul menace. While failure could lead to the death of countless sentient beings, the real threat lies with the divine herald Dhurus, who has undertaken a scheme to wake the hidden god of the Scoured Stars and ensure jinsul dominance of the known galaxy.

Content in Fate of the Scoured God follows-up on the events of Starfinder Society #1-99: The Scoured Stars Invasion and directly follows-up from Starfinder Society #1-39: The Herald’s War, though playing these previous scenarios is not required. Content in this scenario also contributes to the continuing goals of the Second Seekers (Jadnura) faction, Second Seeker (Luwazi Elsebo) faction and definitively concludes the ongoing year of the Scoured Stars storyline.