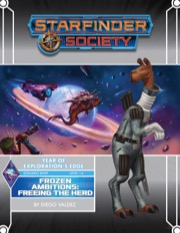 A retired Starfinder reaches out to the Society in search of assistance when the local fauna of a moon in Near Space begins to act erratically. The Society dispatches the PCs to investigate and contact the retired Starfinder and their companions. Soon enough it becomes clear that something insidious is at work nearby, and it’s up to the PCs to step in and stop it.

Content in Frozen Ambitions is an ongoing series of adventures set in the Year of Exploration’s Edge. These lower-level adventures are the perfect starting point for any new Starfinder character, and can be integrated into almost any ongoing campaign with little extra effort. While it is encouraged to begin with this adventure, the adventures in the Frozen Ambitions series can be played in any order.