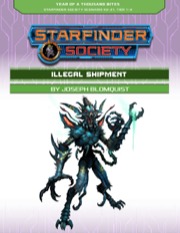 As the Swarm invades the distant Suskillon system, a notorious collector of alien life captures several Swarm lifeforms with the intent of selling them to interested buyers. Bringing these creatures to Absalom Station as part of a clandestine trade, events go awry and the trader’s preserved wildlife escape into the station. In order to prevent station-wide panic, the Starfinder Society sends its best agents to find out what happened, track down the escaped Swarm lifeforms, and stop a full-scale infestation at the heart of the Pact Worlds!