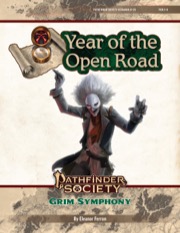 A Pathfinder Society Scenario designed for levels 5–8 (subtiers 5–6 and 7–8).

In the depths of Ustalav, a nefarious doctor conducts foul experiments on creatures both living and dead from his stolen abode in an ancient keep. Now, the parliament of citizens who own the land the keep is built on wish to be free of the grim shadow that waits just beyond their doorstep, and they’ve offered the Pathfinder Society the ancient library in the keep’s vaults as payments for removing its current occupant. Will the Pathfinders liberate the keep and protect the townsfolk from the terrors lurking within its corridors, or will they join the ranks of the undead dancing to Dr. Velshen’s grim symphony?