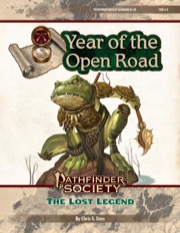 A Pathfinder Society Scenario designed for levels 3–6 (subtiers 3–4 and 5–6).

The Pathfinder Society begins a perilous trek through the swamps and jungles of the Mwangi Expanse, searching for the location where the founding members of their organization formed the Open Road Pact. The clues the Pathfinders must follow are centuries old, however, and their best lead is the final logs of an ancient Pathfinder whose true fate may be markedly different than the world has been led to believe.