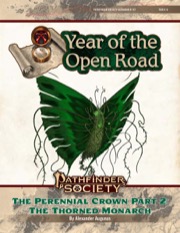 A Pathfinder Society Scenario designed for levels 3–6 (subtiers 3–4 and 5–6).

In part 2 of The Perennial Crown, the PCs must evade the fearsome fey known as the Thorned Monarch. This unrelenting tyrant will stop at nothing to hunt down the PCs and claim their discoveries for themself, bringing to bear not only their awesome physical and magical power, but also manipulating the innocent Bhopanese citizens in their desperate attempts to stop the PCs from fleeing Bhopan with the one item that could put an end to the evil fey’s ambitions.