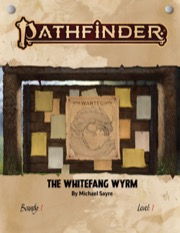 In the frigid region known as the Crown of the World, people from diverse cultures and backgrounds must all band together to survive the long nights of winter and deadly thaws of spring. The way of life of these hardy frontier folk is now threatened by a serpentine creature that slips in during the dead of night and empties their nets of fish and their smoking racks of fresh meat. Unable and unwilling to let this theft stand, the people of the tiny northern town of Aaminiut have placed a bounty on the creature known locally as “the Whitefange Wyrm”.