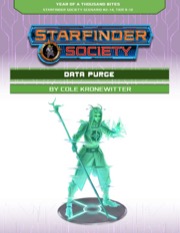 There’s a data leak somewhere inside the heart of the Starfinder Society, somewhere in the Lorespire Complex. Assembled for what was supposed to be an ordinary mission, the PCs find themselves sent to break into to the Society’s central hub of operations. Travelling through ancient accessways, it’s up to this group of dedicated Starfinders to plug the data leak and stop the Society’s most precious secrets from ending up in the hands of their mysterious foes.

by: Dragnmoon
See All Pages